What are the key macro trends that you're seeing?

GB: It's a very interesting time in the energy space, with a lot of change.

One of the macro trends we're seeing is a broader shift in trade flows. The U.S. shale oil and gas phenomenon is one of the drivers of this change as well as the liberalisation of the liquefied natural gas (LNG) value chain, turning natural gas from a regional market to a global market. We've not seen that before, so that's a first.

Another macro theme for us is the energy transition. There's a drive for a low carbon economy which has already brought an increase in renewables to the energy mix, particularly in electricity generation but it is also driving demand for natural gas as a partner fuel. Increasing acknowledgement of the energy transition together with the rise of investor and public activism seems likely to bring more change to energy markets globally. What does that mean? There's a whole host of new spread relationships evolving. Natural gas globalisation, with LNG acting as a virtual pipeline, means these markets are becoming more interconnected and forming new relationships. It's an extra iteration of complexity coming to the market and it's our job to help customers manage that. As natural gas becomes a global commodity, the ability for it to compete with other fuels is no longer about regional supply and demand dynamics. So if you're a trader in these markets, you need to be more informed about what's happening in other regions than perhaps you needed to be two years ago. If you throw the energy transition into the mix, it gets even more complex. I divide energy into four pillars: What do you use energy for? Heating, transportation, electricity generation, and as a feedstock in manufacturing, such as plastics. So if the drive is to be greener, to emit less, then the merit order for different energies in each of those pillars is going to change over the next five, 10, 20 years. We've seen it in the U.K. in particular around electricity generation. As coal has largely come out of the merit order, natural gas is the marginal megawatt hour and therefore a key driver for electricity prices. And this will need to happen in each pillar. If we are to be greener, the merit order will need to change. More renewables in electricity generation across the globe, more renewable fuels in transportation. You will see electric vehicles coming into the mix, and the electricity that drives those electric vehicles will need to come from more renewable sources rather than fossil fuels. However whilst there's going to have to be a change in the dynamic of the merit order within each of these pillars of energy, the timing will be uncertain. Energy is such a key and perhaps underappreciated driver of prosperity around the globe that the practicalities of moving to a low carbon and greener economy will be challenging. 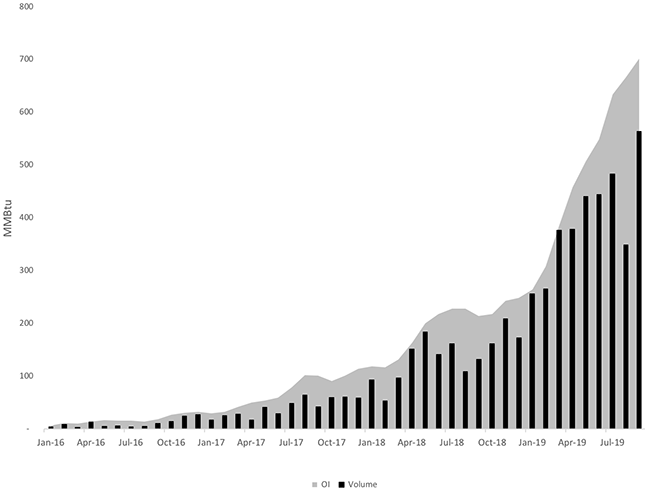 Given these trends, are you seeing customers demanding different products and services, and how is ICE responding?

GB: In the context of the globalisation of natural gas, driven by LNG liberalisation, we are seeing the explosion of TTF [Title Transfer Facility] and JKM [Platts Japan Korea Marker] activity. TTF is the European natural gas benchmark and often referred to as the balancing market for LNG, due to its role in absorbing excess supply in global trade. That's become a key contract in the market and we are seeing a lot of new activity coming to TTF. It's been coined in previous news articles as the "Brent of natural gas." We've also launched several new products over the last 18 months in the LNG space. We've increased the products that we have in the JKM complex, where we have launched half month and balance of month (Balmo) contracts. We have also launched JKM options and activity in those has picked up quite nicely so there are trades going through there on a regular basis. In addition, we launched our US$/MMBTU NBP and TTF 1st Lines, based off our existing NBP and TTF physical contracts in Europe. These were specifically brought on board because outside Europe, the rest of the world sees natural gas in US$/MMBTU and we were getting demand from Asia, and LNG traders in general, saying: 'We would love to see those contracts in US$/ MMBTU to complement the JKM'. We finished off the initial phase of new products in our LNG portfolio by launching the Platts Gulf Coast Marker (GCM) LNG 1st line, and through this contract we are now connecting the key regions of the U.S., Europe and Asia. The GCM is the key benchmark for U.S. exports, JKM is the key benchmark for LNG delivered into Asia and then you have NBP and TTF which are the key European benchmarks to facilitate that balancing role that Europe plays. Collectively, these products all reflect the changing global marketplace for natural gas.

"Now is the time for us to think about the second wave of product development to serve our global natural gas customers."

There has been significant growth recently in TTF contracts. Who are the primary users?

GB: A whole host of people are utilising it. People with European natural gas portfolios, and those with global LNG portfolios are absolutely using TTF. Again, it goes back to Europe playing this balancing role, as the balancing market for LNG. TTF is now by far the most liquid European natural gas benchmark. TTF's deep liquidity combined with Europe's geographic location and physical infrastructure of pipelines, regasification and storage means TTF is becoming the key global natural gas benchmark. Europe is able to absorb LNG. So if Asia has traditionally been the main buyer of LNG and is not buying for whatever reason; whether its China not buying US LNG, or unseasonal temperatures reducing demand, we've seen this year that Europe has been able to absorb this surplus LNG. Europe's role in global natural gas price formation means its main benchmark TTF is increasingly used by commercial participants as a hedging tool but its rise in prominence has also brought with it increased participation from the financial players. 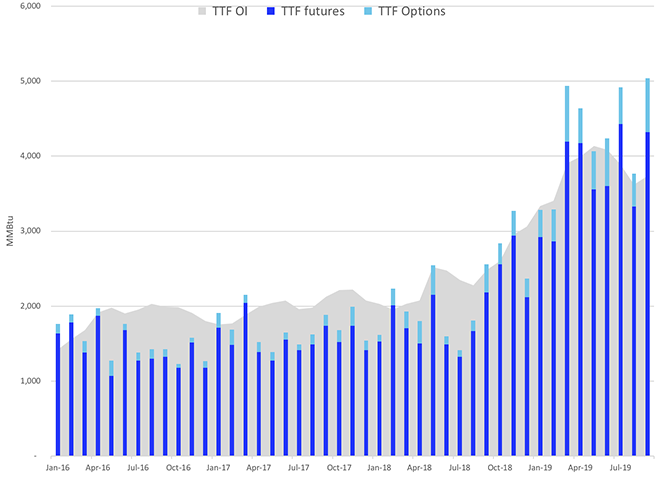 Are there any noteworthy trends in open interest?

GB: The open interest is increasing significantly in both TTF and JKM. TTF open interest is up 50% and 90% in futures and options respectively. JKM open interest is up over 175%. Also from a volume perspective, July and August tend to be quieter, however July this year was a new monthly record in TTF. This is more than likely related to the globalisation of natural gas and the role Europe is playing in absorbing LNG which has removed some of the typical seasonality in natural gas volumes. It's becoming internationalised. We're getting a lot of enquiries around the globe and seeing quite a big pick-up among U.S. participants as we're at a level where people say: 'There is a natural gas contract with deep liquidity other than Henry Hub out there.' Where Henry's volumes are stagnating to decreasing, the TTF and JKM contracts are on an explosive growth path. It remains to be seen whether that will continue, but market fundamentals suggest that TTF and JKM are going to be the most important natural gas benchmarks globally. To give you July numbers for TTF, we were up 200% year-on-year; in August we were up over 100% in futures and 200% in options. Usually August competes with December as the lowest volume month of the year. That seasonality has gone this year. In 2018 we hit a major milestone in JKM of trading over 500 cargo equivalents of LNG. We've already surpassed that this year with JKM volumes up over 200% year to date.

What's next for ICE?

GB: There was a recent announcement between Platts and ICE about the launch of an e-window for LNG. There are a few other things we've deployed from a technology point of view in that space. Now we're looking at the second wave of product development. When we were engaging with our customers back in early 2016 we felt something was changing in the LNG and natural gas space. Our focus then was on making JKM successful, as there was neither an Asian natural gas benchmark, nor an LNG contract. Our customers told us we needed to focus on building liquidity there and then think about the other stuff. We are pretty comfortable that JKM is the Asian natural gas benchmark. JKM seems to be the winner and now is the time for us to think about the second wave of product development to serve our global natural gas customers. And as for the energy transition, ICE is also the leader in global environmental contracts. European carbon rose to prominence last year with the significant rise in EUA prices. This year has been a break-out year for our U.S. complex, particularly in the corresponding carbon space. Ultimately, if there is going to be a move to a low carbon and greener economy, then secondary markets that tell you what the cost of pollution is or what the price of a renewable attribute is become increasingly important, so people have the tools to risk-manage this energy transition.