Part 1: A series by Energy Intelligence

2020 has been a year of firsts. New rules to cut sulphur dioxide from shipping fuel seemed poised to drive the oil markets. Yet the coronavirus pandemic quickly eclipsed IMO 2020 and dominated the scene.

COVID-19 caused a massive collapse in oil demand, as populations were locked down and the global economy tanked. At the peak of the crisis, the world faced a surplus of over 10 Mb/d of crude oil, and the laws of supply and demand put tremendous pressure on oil prices.

In April, for the first time in history, NYMEX WTI crude oil futures plummeted into negative territory, sending shockwaves through the oil industry and the financial community.

Prompted by this extraordinary dynamic in the first half of 2020, Energy Intelligence prepared an in-depth report for ICE on the role of the Brent and WTI crude oil benchmarks, their mutual relationship, and their interaction with the global oil market.

We will release sections of the report in a three-part series, where I’ll be sharing my takeaways in the introduction of each piece.

The purpose of this report is to take a deep dive into the role of the Brent and West Texas Intermediate (WTI) crude oil benchmarks, their mutual relationship, and their interaction with the global oil market. The report looks at the dynamics that shape the characteristics of Brent and WTI, in particular their physical and financial drivers.

The report was prompted by the extraordinary oil market situation in early 2020 as a result of the Covid-19 pandemic, and prepared by Energy Intelligence for ICE Futures Europe. Virtually overnight, the world saw demand for refined products collapse as governments restricted trade and travel to stop the spread of the virus.

Refineries were forced to limit their runs and crude oil intake.

At the peak, the world faced a surplus of more than 10 million barrels per day of crude oil. Production was shut, and surplus oil went into storage. The rules of supply and demand pushed oil prices down sharply. Tremendous pressure was put on the benchmarks Brent and WTI, which are the key instruments to determine the value of crude oil. 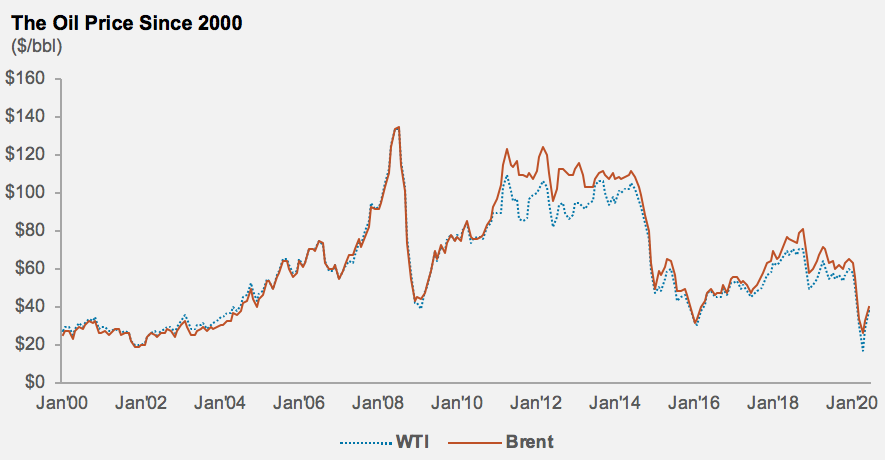 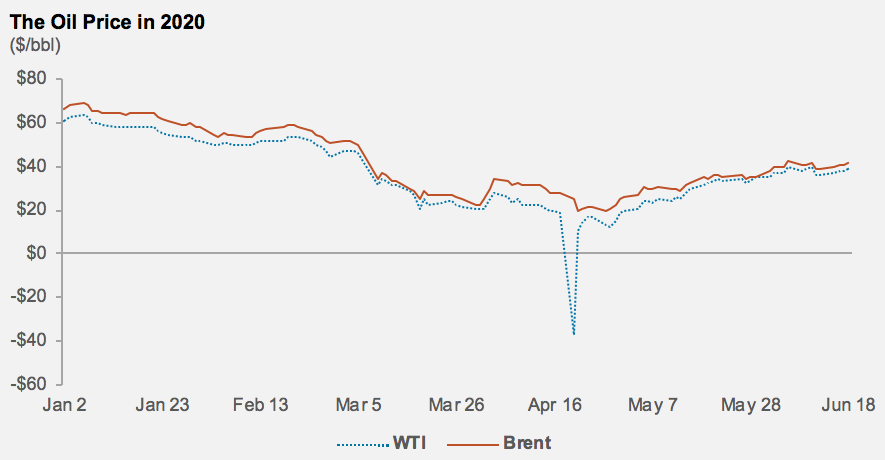 On Apr. 20, for the first time in history, the oil price fell into negative territory when WTI collapsed to minus $40 per barrel. Although the subzero price was recorded for just one day, it sent shockwaves throughout the industry. With most oil production in the Americas linked to WTI, all that crude had to price negative as well. And if such pressures could buckle WTI, markets wondered if it could also happen to Brent, which informs global oil prices.

For WTI, which links its futures contract to the physical delivery of oil at the landlocked storage hub in Cushing, Oklahoma, too many futures contracts overwhelmed the physical system. The holders of these con- tracts had no intention of taking physical delivery. Their future positions, one day before expiration of the contract, represented more than 100 million barrels of oil for tanks that could accommodate only a few million barrels.

The intricate Brent pricing system handled this unprecedented supply disruption, applied discounts, and did not go negative. Two factors were key. The first is that Brent is a seaborne benchmark and that its physical discounts paid for storage. In fact, those discounts allowed for oil stored in tankers alone to grow by 120 million bbl in April and May — the equivalent of 60 very large crude carriers of 2 million bbl each. The second factor is that Brent futures financially settle at expiration without physical delivery. There is no pressure on physical tanks. A vast volume of contracts were trading very close to expiration and were cash settled.

The events of 2020 are unique. But the extreme price volatility of 2020 has shed a new light on the characteristics of global benchmarks as they have developed over the years. Notably, being water- borne in nature, Brent can arbitrage market anomalies away, which helps shave volatility peaks.

Both Brent and WTI have exchange-traded futures contracts that reflect the actual price of oil linked to the contract. In the case of Brent, the link is indirect; in the case of WTI, it is direct. As oil is a strategic commodity, market sentiment about the wider macroeconomic and political context also blends into the price.

Brent’s personality is that of a physical benchmark. It attracts more physical participants like producers and merchants and sets a global price of oil for all to see. Its pricing ecosystem allows for physical and derivative prices to diverge and dissipate shocks in times of dislocations. This trait also allows for surplus oil to sail to the market and for high volumes of contracts to trade without directly upsetting the physical market.

WTI’s personality is that of a financial benchmark. Its system attracts more financial participants like banks and hedge funds that are typically not looking for physical delivery. Yet, it’s a futures contract designed for physical delivery, which directly links the contract price on the exchange to physical prices in the market. The pricing and delivery point for the contract is landlocked in the US Midcontinent, in Cushing, which has a large, but ultimately limited, storage capacity. On Apr. 20, too many contracts ended up in the system ahead of expiration. With no capacity available to store the equivalent oil volumes of all the expiring contracts on 2019 that day, the price collapsed.

The negative WTI price was one such signal — a warning that risk capital can overwhelm the physical oil market. Oil prices have stabilized since. Producers have cut crude oil production and global oil demand has bounced back, creating a new equilibrium in the physical market. The shock absorbers in international oil trade, Brent futures and dated Brent, are again trading closely together.

The oil price gets discovered in the spot trade of crude oil. The exchanges for futures contracts use these fundamental drivers of supply and demand as the base for their own price discovery and mix in broader market sentiment and geopolitics. Brent is the global benchmark and the guide for the spot market, which is most visible in international trade.

The world produces 80 million b/d of crude oil and 45 million b/d gets exported. Of the exports, 27 million b/d is sold under term contracts from producers like Saudi Arabia, Kuwait and Iraq. Those are regular flows with agreed volumes and a crude price linked to the spot market. The balance, 18 million b/d, trades in the international spot export market, with producers like Norway, the UK, the US and Angola.

Brent guides 11 million b/d of trades in the spot market — 63% of the total, versus 22% for Oman/Dubai and 9% for US West Texas Intermediate. Brent guides prices for crudes from the North Sea, the Mediterranean, the US and Brazil, but also streams from West Africa and Asia are taking their lead from the basket of crudes — Brent, Forties, Oseberg, Ekofisk and Troll — that set the price for spot car- goes of dated Brent. They add up to around 900,000 b/d, and essentially set the price of oil for the world, including Dubai and Oman.

The unprecedented plunge of WTI prices into negative territory has prompted a close examination of the forces at play, including the likeliness that this may happen again. The precise circumstances of the negative price formation are under examination, the broad drivers are understood. Inexperienced traders ended up holding contracts that typically are out of the market in the days preceding expiration. The trading system could not compensate for that.

The circumstances of Covid-19 are special in many ways. The pandemic shook up the oil market and the complex supply system that pro- vides 100 million b/d of refined products to consumers around the world. In the first five months of 2020, some 1.3 billion bbl of surplus fuel was flooding this market after demand dried up overnight. Price signals from benchmarks helped this oil finds its way into storage tanks around the world.

Part two of the series delves into why the world need benchmarks and what characteristics they obtain.

Part three closes out the series with Brent’s evolution, its markets and why commercial and non-commercial participants rely on it.

Learn how this crude became the epicenter for world crude and now prices 78% of global oil.